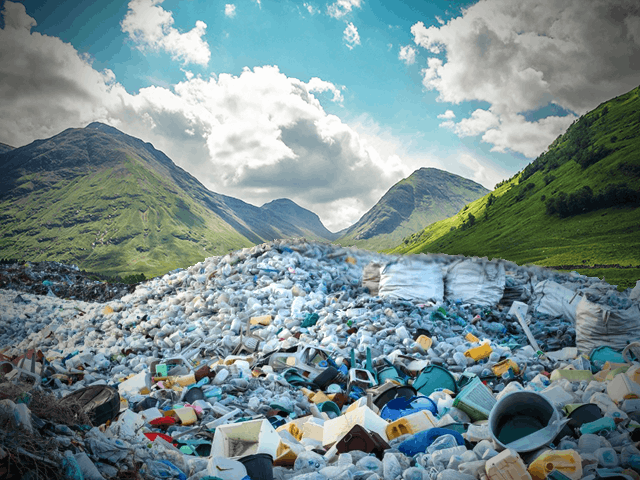 We’ve Got a Plastic Problem

Calling all humans… We have a plastic problem! It’s not an urban legend, myth, or political discussion. It is a massive problem that can no longer be  ignored.

At the end of March a pregnant sperm whale was found dead on a beach in Sardinia, Italy. The soon-to-be mother had 50 pounds of plastic in her stomach. In the same month another whale was found dead with 88 pounds of plastic in its stomach; and a few months prior a deceased sperm whale revealed 115 drinking cups, 25 plastic bags, plastic bottles, two flip-flops and a bag containing more than 1,000 pieces of string in its body. It’s devastating… and unfortunately these are not isolated incidents.

Plastic was found in 100% of the amphipod samples collected in the deepest spot on the planet, the Mariana Trench; and scientists estimate that roughly 90% of all seabirds have ingested some amount of plastic, killing 100,000 marine mammals each year.

People… Humans … We are responsible for all of this plastic! Researchers estimate that about half the human population on the planet would have plastic in their bodies if sampled. Gross and terrifying!

So what do we do? First, we continue to raise awareness. That’s what World Champion synchronized swimmers Kate Shortman and Isabelle Thorpe are doing. In March, the British swimmers performed their championship routine in a swimming pool filled with plastic bottles and trash in a shocking display of beauty and repugnance. This is what I love about the arts—at its best it can raise the consciousness of those who experience it.

For a few years now I have been developing a broadway show with the planet’s health (and trash specifically) as the main theme. I was also happy to hear that SeaWorld, where I have been choreographing their cirque-style shows for nearly three decades, had decided to eliminate plastic straws and bags. Other global brands like Ikea and Royal Caribbean have followed suit.

Knowing that our birds, fishes and even our own bodies are filling up with plastic, there will still be people who complain and refuse to accept we have a problem. The reason is that once we accept responsibility, we can no longer claim ignorance for our actions. I think this is a larger theme within our society—people refusing to own reality because once they do they might have to make a change—and change can be really scary.

So what can we do? We can accept we all have a role to play. This sounds simple and perhaps a bit trite, but it’s nearly impossible to tackle this problem if, as a collective, we think others will be the ones who solve it.

Here are a few simple quick start changes that collectively would make a huge difference as well as increasing our own awareness:

1) Recycle. Rinse your plastic and put in a recycling bin. That may mean getting another trash bin for your home, but every time you recycle an item it makes you that much more aware and appreciative of our planet.

2) Challenge yourself to not drink from nor purchase a plastic water bottle for a week. Instead, use refillable bottles. Then do it for another week.

3) Vow to not use thin plastic bags at the grocery store for your fruits and veggies. Most of them already come in their own nature made sacks like bananas, onions, avocados, etc. And those that don’t get washed at home anyway.

Plastic is an amazing invention and super convenient. That’s why it’s so easy for us to thoughtlessly use and dispose of it. I’m guilty of this as well, but I’m also accepting responsibility and making a concerted effort to be mindful and to make changes. I’d love to hear your ideas on what you do or are going to do to make a change. Plastic is a problem that keeps washing ashore, but with each of us doing our part, it’s my hope we can change the tide.

Here’s an article I found with further solutions to our plastic problem.

I love straws because my teeth are weirdly sensitive so I bought a bunch of reusable straws instead of buying plastic straws. I also use a reusable K-cup for my Keurig. I colleague of mine also told me that they make reusable dental flossers that are metal so I am looking for one of those as well.

Love this. For several years I’ve been trying to do small things to reduce the amount of plastic and trash that I create. At one point I bought my parents water bottles and water filter pitcher so they’d stop buying bottles water. Such a waste. I started using reusable menstrual products which have a bonus of being better for the planet but also being better for me. I recently looked into using a metal safety razor instead of disposable razors. It’s interesting to me that not that long ago we didn’t have plastic. You had to take bags to the… Read more »