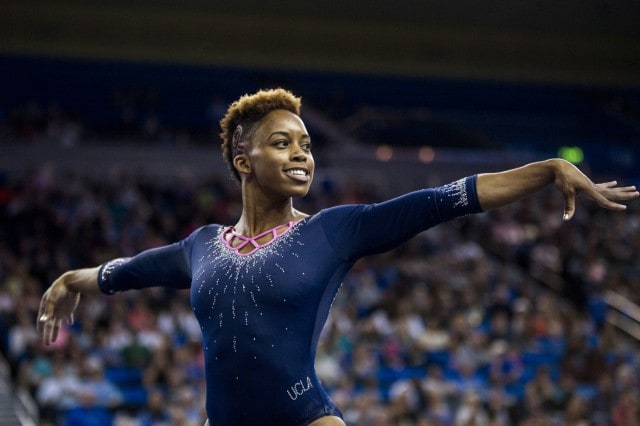 This past season I received one of the greatest compliments I’ve ever received about our team. After NCAA’s a fan said to me, “You have the most Diverse team.” I looked at our team and realized he was right.

“Your team proves that celebrating diversity can actually be unifying versus divisive.”

Later that month at our awards banquet Sadiqua told the story of her freshmen year when I told her she should find a unique “look” for our meets. Something that was unique to her personality. I immediately suggested a faux hawk. Sleek, fierce, yet in control and commanding. She went on to share that when she styled her faux hawk for meets and eventually shaved it into a real mohawk, she immediately felt empowered. She said she felt like she’d finally arrived into the person she was supposed to be. It gave her courage and confidence that she’d never felt before.

This is part of the UCLA Gymnastics brand. Be who you are and continue to develop who you are. So many times we try to impersonate someone else whom we admire. It’s not wrong, it just doesn’t do anything to help reveal the authentic YOU. Instead, wake up every morning with intention and the understanding that you are unique and there’s never been another you on the planet—and there never will be another you on the planet. Understanding and embracing your uniqueness is inner power the world can see. Appreciating the authentic diversity around us is a gift we can give.

[…] Last summer I wrote about how Sadiqua Bynum styled her hair into a faux hawk and then into a fully-shaved mohawk to demonstrate the fierce and powerful woman she had become. Her senior year at our end-of-the-year banquet, Sadiqua shared how giving herself a fierce appearance, particularly the mohawk, impacted the way she felt about herself. Sound familiar? […]

This is one of the many things I’ve observed watching the UCLA gymnastics team – I love the diversity and I remember you talking to Danusia about how you believe that when you are around people who are different from you that you learn to observe the differences without judging each other. My friend and I have had a lot of conversations about body image, hair, racism, cultures – mainly because we’ve experienced some very prejudiced people when we’ve been seen together and we have both ranted a lot about what Chimamanda Ngozi Adichie calls ‘the danger of the single… Read more »

Thank you Laurie. One reason I love my opportunity at UCLA is because I get to discuss life “stuff” like this with our young women / future leaders in society. I’m curious to look up Chimamanda Ngozi Adichie. The “danger of the single story” sounds fascinating. Thank you for sharing.

Miss Val,
Thank you for sharing this inspiring story! I enjoy reading each and everyone of your posts. If you have the chance, I’d love for you to check out (and maybe even follow) my Twitter and Instargam accounts, @uclagymedits ,I’m looking forward to reading more posts like these!

Thank you “UCLAgymedits” 😉 So …. do you have a nickname?

this is awesome. my 6-year-old, who is going to start competing level 3 this year, is already a big UCLA gymnastics fan. she is such an original authentic personality that this is probably one of the reasons why. thank you, Miss Val!

YAY! I’d love to meet her sometime this season. Isn’t it fun watching her enjoy her uniqueness.

we’ll definitely be there cheering you and your team on at least once this season and she’d love that!

I love that you risk allowing your gymnasts to express themselves – and actually encourage it. Instead of striving to be someone else, they seem to thrive in that freedom and we all get to see the beauty of their uniqueness and the joy in their gymnastics.

I agree. I love watching our young women blossom into their authentic unique selves. It’s so inspiring to witness the calm they get when they stop trying to “fit in” and start really liking who they are.