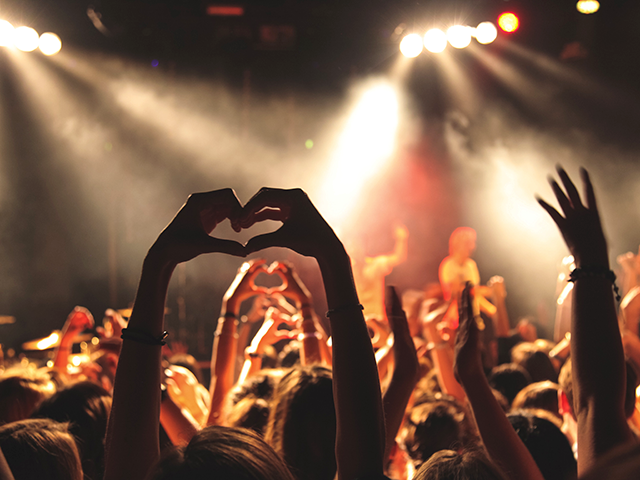 Own Your Inner Rock Star

I have choreographed shows for SeaWorld’s summer Cirque-style attractions for 27 years. Each year we hire about 30 performers, a third of which are “newbies;” those who have never performed or had formal gymnastics or acrobat training. I have to admit, I have a blast coaching them up like they’re Olympic athletes. I am relentless with them with EVERYTHING: technique, form, movement quality, musicality, teaching them to count music, facial expressions, the importance of transitions, appropriate demeanor in rehearsal… And then hearing them tell me from across the stage, “Miss Val I’m just really tired” is probably not the best choice.

For the Newbies, I’m having to start from scratch with the rules of theatre, “If you can see the audience the audience can see you;” and backstage performance etiquette, “No, it’s not okay to burp and fart in the dressing room filled with other male and female performers.” Yes, I actually had to give this talk just last week. It also included, “I’m not interested in your personal hygiene philosophy… use deodorant.”

While I can’t believe how many times I have to repeat “straighten your legs,” “pointe your feet,” and “stand up on 1 not 1 and…” it is their on-stage dynamic “showmanship” that is the biggest challenge. Most of them bring it sporadically throughout the number, but they don’t understand how to keep that taut-inner-pulsing-magical-hum throughout the whole show.

I was about to give my last “pre-game” speech to the cast yesterday before our show opened when I had a revelation… tell them to tap into their inner Rock Star!

So how can these Newbies (and you!) tap into your inner Rock Star? First, know that everything you do is part of the show, so execute with confidence and if you happen to make a mistake continue with conviction. There is no failure (remember I don’t believe in the F word), just the exciting and often unpredictability of live performance which all of us call Life.

Next, own the skills, style and flair you bring to your daily life. When Sammy Hagar took over the role as lead singer of the rock band Van Halen, he didn’t try to emulate David Lee Roth—he became his own unique Rock Star. Over decades fans got to hear the same songs with two different Rock Stars bringing their own flair to the stage. Neither tries to match the assets of the other, all they do is fearlessly perform.

Rock Stars know that people pay to see them perform. The attendees are fans and want to say they just witnessed a great performance. Rock Stars don’t go on stage wondering if the crowd will like them… they understand the audience has already purchased their tickets.

It’s exactly the same with you, whether you’re on the stage or behind a desk. Your employer hired you! They bought a ticket to see you perform. Execute your job with confidence. Create, cultivate and own your peronal cadence, your inner humble yet unapologetic taut magical hum. Embrace your inner Rock Star!

And if you’re in San Diego go check out our show ~ Cirque Electrique. It is spectacular… and filled with Rock Stars! Make sure you bring your strut.

I must admit… some days I’m the total package and other days I’m just the rock. Personally, I wish you were here to coach me and push me until I’m tired then make me do it again. “One and…” I sure miss those words from my old dance days… now I’m just old. But I swore to myself I would tap into my inner voice that says “What would Miss Val tell you???” Embrace your inner Rock Star!!! I hear you loud and clear:-)

Hahaha I have consciously embraced the fact that the older I get the younger I feel… it’s because I no longer have to strive for perfection. I let myself make mistakes and don’t beat myself up about it. I embrace my inner Betty White RockStar! Now THAT Is fun!!!

Every time I get on the trapeze, I think of what you told me on the very first day I met you…to focus on being the best ME that I can be, and not try to be anyone else. I have spent my time since then in rehearsals and shows appreciating the opportunity in front of me to forge my own path in the performing world. I will never forget that conversation, and it helps me to get through those moments of self-doubt. Thank you, Miss Val!!!

You are very welcome Ashley. Yes are THRIVING being an absolutely fabulous YOU!

I really take your messages to heart about Random Acts of Kindness and owning up to your Rock Star. It’s really important to treat everyone with kindness and respect because we all have bad days. You can make someone’s day by doing something nice for them even when you’re not feeling your best. People really appreciate it. Also, it’s important to own up to your true self and your own mistakes. I am apart of my high school’s marching band. Our directors and staff also emphasize showmanship, and movement precision and quality during rehearsals. However, everyone in the ensemble makes… Read more »

Donovan, thanks so much for your message! What instrument do you play in the marching band? And how did you find out about my website?

I play the clarinet and I found about your website from my PE coach at my school.

WOW that’s nice. How often do you play? Are you in the school band?

I’m definitely not a rock star. I’m the runaway and hide.

It is such an honor and a privilege to be under your direction. We have learned so much just by being in your presence! You teach us not to let our fears control us. “On the other side of fear are the greatest things in life” -Will Smith. You are a phenomenal life coach!! I only wish I could carry you around in my pocket so that you could give me that kick in the butt or boost of confidence when I need it!

Thank you Miss Val! You are a rockstar and a legend!

Thank you Kenny! I agree with you and Will Smith. “On the other side of fear are the greatest things in life.” It’s exhilarating to accomplish something I thought was out of the realm of possibility for me. While I appreciate you wanting to carry me around in your pocket 😉 … you have everything you need to continue to be a savage confident amazing Rockstar in life. Can’t wait to see you in our show again. Love and hugs ~ miss v

I remember when I came to cirque de la mer last year in 2016 I had never been apart of an organized show outside of my industry. So when I show up I’m hit with this huge of things I didn’t understand (ex. All the acrobatic and theater terms) I was just happy to know stage right from left! But after a few weeks things started to come together and make sense. However after rehearsals when the show started it gave me a feeling I only felt while competing which is just this addicting feeling. So after the season ends… Read more »

Brilliant! Thank you Jake. It has been so exciting to see you come to life as a seasoned performer. Rock On!

It’s all about how you carry yourself, isn’t it? When I do not feel confident I try to “act as if” (see what I did there? ?) I am. I like to imagine that my inner rockstar is Stevie Nicks. I love the way she commands attention. It’s not vulgar or in your face, it’s just her being her. Twirling around with her tambourine, singing those incredible songs that have stood the test of time. It’s like she’s confident but doesn’t need to announce it with words. That’s the kind of confidence I want to have.

Own it Kelli Nicks! Rock on!!!

I’ll have to forgo the twirling, That’s a sprained ankle & broken lamp waiting to happen ?

I was lucky enough to catch this talk to the cast last week, and even though I have had the ultimate pleasure of learning the many lessons of performing for over 10 years now from Miss Val, this was still something that I could learn from. Miss Val once taught me, when you are wrong stay wrong. This meaning when you mess up let’s say the side of the movement or certain position, don’t change it, wrong and strong and the audience most likely won’t know the difference. They only know when you break the spell by trying to fix… Read more »

Thanks Michael for adding to the conversation. You certainly mastered the art of RockStar on stage!