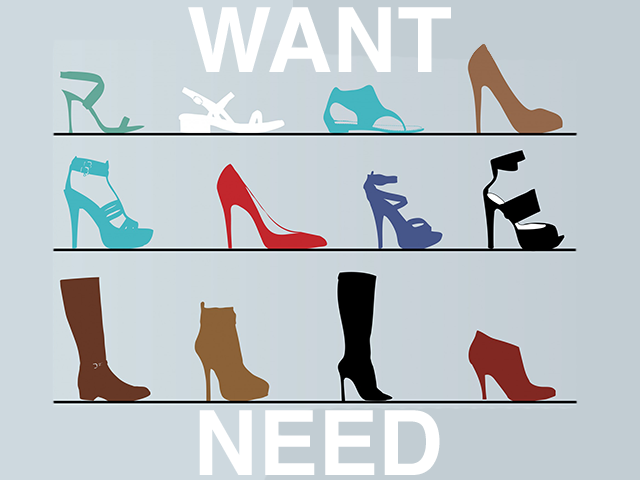 Need It? or Want It?

I have always been fascinated by the subtlety of words and their meanings. Too many of us get in the habit of saying things that we don’t mean, myself included. My current reference is when we say we need something when what we really mean is that we want something.

This struck me the other day when I was having a discussion with a young woman who told me she aspires to be an actor. We were discussing how she could make this goal a reality. Part of it was looking at her expenses, including all the little things that might help her save money. One item on the list was her porcelain nails. They’re not cheap and they require an ongoing investment for upkeep. I mentioned she could save some money by changing how she maintains her nails and she replied that they were important to her because they made her feel good about herself.

Ok… I can understand that.

I later asked if she’d gone on any acting auditions. She replied she didn’t feel comfortable taking that step until she got some cosmetic surgery. I got frustrated trying to explain to her how she didn’t need to change anything about herself to feel confident.

It wasn’t until later that night when I arrived home that I remembered a conversation I was having with someone who asked why I liked pilates. I told them I love pilates because it strengthens me from the inside out. I realized this young woman was trying to build her confidence from the outside in. And what she really needed, instead of porcelain nails and cosmetic surgery, was to build habits that fortified her from the inside out; like meditation, yoga, prayer, dance class, reading empowering books, or anything else that strengthened her inner voice of self-like, self-worth and confidence.

This gets me back to the importance of saying what we mean and meaning what we say. Did she need the cosmetic surgery in order to feel confident going to auditions or did she just want the surgery and needed to find other ways to fuel herself from the inside in order to be able to walk into an audition calm and confident (two of my favorite words)?

So no, I don’t need a new sweater… I want a new sweater. I don’t need that new pair of shoes. In fact, I could live the rest of my life and not buy another pair of shoes and be just fine. I want those beautiful new sassy stilettos. This isn’t an exercise to make you feel guilty for wanting something materialistic or frivolous. Quite the contrary, frivolity is fun! This is about being conscious of our words so we don’t get caught up in making the frivolous materialistic fun more important than it really is.

Here’s to owning our frivolity!

[…] What’s most impressive is that there is seemingly no benefit that comes from being polite to an inanimate object. But think about it, think about the small moments of joy we get when we do something silly or fun when no one else is around to witness or share that moment. There is something selfishly intimate about enjoying one’s own silliness. As I’ve written before, this gets back to the importance of learning to like and fuel yourself from the inside out. […]

I try to be very conscious of the words I use. Last thing I want to do is misrepresent what I mean (need vs want, nervous vs excited, sore vs injured, etc), or hurt someone’s feelings. I think I can understand how your friend is feeling because I have, and still do, have those same feelings. I’d hate to see someone so young permanently alter their appearance before they’ve had the chance to love whatever it is they want to change. Sometimes when I flip through magazines I can’t help but notice that so many young women look alike. Same… Read more »

There is also a passage in the Bible that says essentially out of the overflow of the heart, the mouth speaks. We would be less careless with our words if we did fill ourselves with the things that truly satisfy such as love and connection and see a lot of our other pursuits for the fun interludes they are instead of counting on them to maintain our joy. Great post; easy to
understand and hard to do sometimes!

Thank you Lee. Very well said – thank you for posting.

I agree about the importance of frivolity. As long as we acknowledge it’s a choice and not something we “need” I’m all for it.

I’m not a religious person (understatement of the 2010s) but I’d like to comment that there is a Gospel passage of Jesus being hungry yet noticing the nearby fig tree being devoid of any food, so he cursed it and it withered…all to show us that our words can be that powerful. This is why it’s so important to be aware of what (and how of course) we say. I didn’t mean (going without saying) for this to be a sermon but one of my best friends named Jimmy who studies Aramaic told me this when I asked him, “If… Read more »

I love hearing thoughts from non-religious people. They are quite often extremely insightful and not something they were “taught” to think or say. Thank you for the post