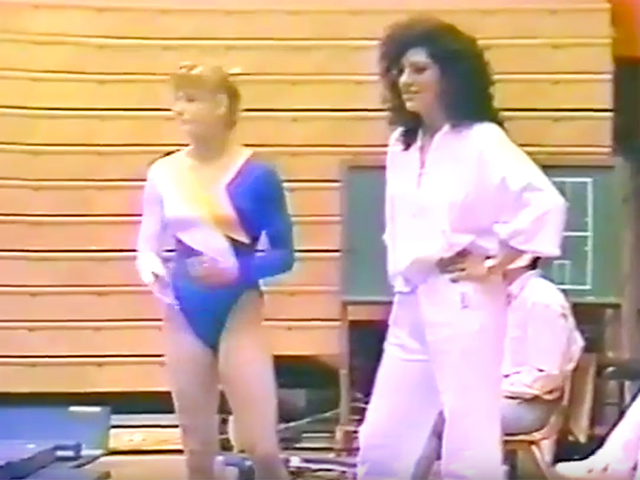 I could have retired a long time ago if I received a nickel every time someone asked me what my favorite floor routine was. So when I wrote my first book, “Life is Short, Don’t Wait to Dance” I knew I had to address this topic. In it, I share the routines I believe pushed the artistic envelope and furthered the artistic quality of the sport.

Now that the book has been out a couple of months, several people have commented how they wished they could go online and see the routines that I highlight in the book. So, without regurgitating the details, below are the videos with just a brief description of what sets them apart. Also, I promise I wasn’t trying to imitate Don King with my early hairdos.

I started following UCLA gymnastics around the time that Leah Homma was competing and not only did I love her floor routine but she was absolutely GORGEOUS on bars! I was so lucky to see her in person when your team competed against UC Stanta Barbara back when they had a team. I also got to see Stella Umeh and she was equally as amazing on beam. I love that you come up with a character and concept for each athlete on floor. I find that it provides a stronger connection with the audience and I love having a story… Read more »

ha ha! I did a post similar to this a week or so ago, as a lot of friends kept sending me the link to Katelyn’s routine or tagging me in facebook comments sharing the videos about it after Deanna’s video went viral on your second meet of the season. Angi Cipra’s phone routine is possibly one of my all time faves, and I love Katelyn and Gracie’s this year so they are possibly going to knock Angi off of the BrunetteKoala fave floor routine podium spot! But the ones I would add is Onnie Willis routine (and Sadiqua’s legacy… Read more »

This is your list but I want to add one of my favorites! Malia Jones
https://youtu.be/aRPxwShgNl8

Megan
Reply to  Scotty B

That attitude turn to scale, wow! She is lovely to watch!

Loved this. Thanks for sharing! Undoubtedly each routine is fantastic and wonderful, great things you have done Miss Kondos.
P. S. Don King had nothing on you! ?