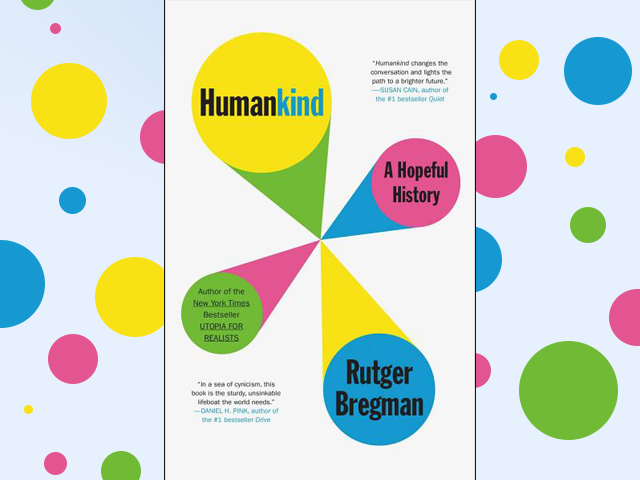 We are days away from our presidential election and it’s impossible to ignore the divide that’s happening in our country. Regardless of the outcome, we need to appeal to the better nature of our character. Depending on the time of day or the last thing you read on social media, that might be hard to imagine; but if you choose to log off for a moment, I have a book I’d like to recommend that will restore your faith in humanity. The book is “Humankind: A Hopeful History” by Rutger Bregman.

The essential argument Bregman makes is that humans are decent by nature. Therefore, the feeling that we are hanging on by a thread as a society and just moments away from chaos isn’t correct. Not only is it wrong, but Bregman cites numerous historical events and experiments to prove it.

I’m not going to lie, some of the book gets a little wonky and dry, but other parts are absolutely fascinating. Bregman digs into a variety of incidents throughout history to reexamine our preconceived notions of what happened and shows us our innate goodness in humanity.

Through exposing historical facts, Bregman uncovers the truth that over and over again when the most was required of humankind our best selves rose to the challenge. “But the World Wars!” you might be screaming. He addresses that too. In 1914 on Christmas Eve, for example, not only did the soldiers on the opposite sides of the battlefield not want to kill each other, but they actually sang Christmas Carols together in a miraculous truce… Sadly they were commanded to resume the battle shortly thereafter.

This gets me back to where we are today. If you consume a negative world around you it’s not surprising that you think we’re on the brink of some sort of societal collapse. However, if you look at the underlying evidence—as Bregman does throughout human history—you’ll find that people on the left and right are decent humans just trying to get by. Our differences aren’t nearly as great as our love for those around us. It’s through cooperation, compassion and forgiveness that homo sapiens have thrived as a species as evidenced by Bregman’s work. We’re at a precarious time in our country’s history where we can benefit from this reminder. We’re not enemies of each other as much as we’re passionate well-meaning Americans. I hope you enjoy the book!